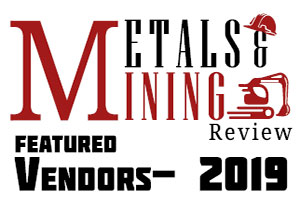 Bill Starn, CEO
Over its 75-year history, Starn Tool and Manufacturing Company has built a reputation for innovation. According to company lore, they were the first in the region to have a CNC lathe, the first to provide CNC milling, the first to get into EDM.

“We were doing things with tolerances that the rest of the world said you couldn’t do,” says CEO William “Bill” Starn from the company’s Meadville, PA headquarters.

Through the years, Starn Tool and its family of companies including the Starn Marketing Group “SMG,” Penn Weld Inc., Mecal by Starn and Starn Technical Services have served a wide-range of industries from automotive to aerospace to medicine. Products made by Starn have improved complex spinal surgeries to eliminate the need for pins and rods. And, perhaps most notably, Starn worked on a critical mirror for the Kepler satellite which launched into outer space in 2009.

“Today, we’re rarely the first to do anything,” Starn says wryly. Looking at the company’s capabilities and its state-of-the-art technology, some people might be confused by this comment. “Listen,” he quickly explains, “every good shop has this stuff today, so we’ve got to have another differentiator.”

For 40 years, Starn has guided the company he purchased from his father. His communication style is straightforward and direct, but his tone belies a genuine love for the business and his employees. Today, Starn is reflective about his 40 years of leadership – both the changes he has witnessed and what remains the same.

Starn’s strategy for success is as simple to say as it is hard to execute: Build long-term relationships with employees and customers. When someone comes in the door, Starn’s goal is to keep them.

And he’ll let just about anyone in the door. “If someone pulls into my parking lot with a flat tire, I’ll give them a tour while they wait for AAA,” he says.

Starn asserts that the key to solving the much-bemoaned manufacturing skills gap is a willingness to invest in people. Of other industry leaders who complain about having difficulty recruiting and retaining workers, Starn says flatly, “The problem is that too many company owners and leaders only want to look at skills.
They need to look at people.”

Starn thinks a lot about people. Recruiting is a never-ending process at Starn where the leadership team believes that the workforce should be comprised of people from at least three different generations at all times. That 15-20 year spread in age and experience allows for skills and management training to pass between the ranks of employees and prevents valuable know-how from being lost when a veteran worker retires.

To keep bringing in new workers, Starn explains that company leaders have to take chances. He smiles when he talks about some young employees who joined the company through its co-op program. “They didn’t know a blasted thing about machining,” he says, “but they needed work and were willing to learn.”

All junior employees at Starn are put through a rigorous training program across the company’s full suite of business sections and job functions. The unique program, called Super High Intensified Training - an amusing acronym if one chooses to use it - is designed to equip new employees with a holistic understanding of the company and allow them to picture themselves in different roles.

To train for the future, Starn says the company leans on its past. “Our history is our advantage. We were in business when machines just weren’t very good,” he says. Now that the machines are better and more powerful, Starn muses, too many companies are becoming overly reliant on technology and neglecting the basics.

“The physics of machining and the science behind drilling are the same as they were 100 years ago,” Starn says. So the Starn training method blends the old world with the new, focusing on the how and why of machining before integrating Starn’s top-of-the-line technology.

But, Starn repeatedly emphasizes, it’s really not about machines or skills. Rather, he says it’s about finding the right people, even when they come from unexpected places. Starn shares the story of 23-year-old Willow Peterman who was recently promoted to corporate controller and made a voting member of the Board of Directors. Starn notes that effective recruiting and leadership sometimes means setting aside any stereotypes about what kinds of people make good manufacturers. “Willow is proof than manufacturing isn’t – and never should have been – a man’s world.”

Once a company has the right people, Starn says, it’s equally important to treat them well. He talks about making work the “safest thing” in his employees’ lives. Starn provides not only reliable employment but also generous healthcare and retirement benefits and a profit-sharing program. The company’s leaders also strive to foster an overall supportive environment. Starn says, “When you feel secure at work, it crosses over to make the rest of your life better. And when people feel better, they want to stay doing what they’re doing.”
And the strategy seems to be paying off. The company prides itself on employing families and counts a number of spouses and siblings among its ranks. For example, Starn noted, the King family has had at least one person on the payroll since the 1950s. Tommy King, who marks the family’s third generation of Starn employees, was recently promoted to division head. Tommy’s grandfather is retired, but his father is still working for the company.

That kind of long-term loyalty and upward mobility is not unusual for the company. Starn’s plant manager, Shawn Schmitz, started with the company as an apprentice, straight of out of high school. And the current president of the company, Tim Mullen, first came on board as a janitor. “I don’t know who is going to run the company 30 years in the future,” Starn says, “but I know they’re here.” 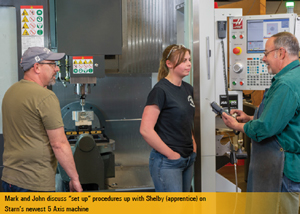 Starn believes that consistency is key to retaining customers as well. “Our customers come to us to solve a problem,” Starn says. “It might be quality or reliability or delivery, but they have an issue and they need it fixed.”

Starn’s work for customers is guided by simple principles: first, profit is just the result, never the goal. And, relatedly, never sacrifice quality for cost. Keeping these mottos top-of-mind, Starn says, keeps everyone from rushing and making decisions they will regret later.

“In the end,” Starn says, “machining comes down to reliability and repeatability – and so does service to customers. It’s about doing what we say we’re going to do, every time.” 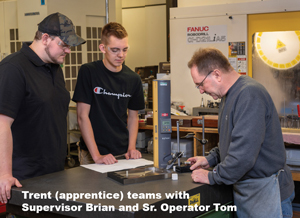 Looking back over 40 years of leadership, Starn says that company’s technology has changed, but its core mission and unwavering commitments to excellence in products and loyalty to people have not.

Starn closes the conversation by saying he’s looking forward to an upcoming pig roast on the company grounds for employees and families. “Everyone will be there,” he says. “When we plan a party, the people from the shop are the first people we invite. They are my friends and my family.” 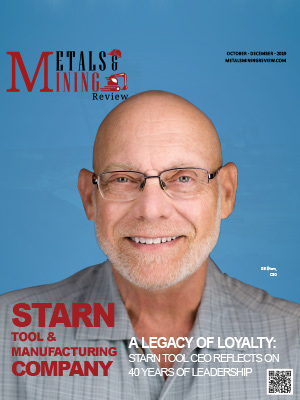